Here is a speech I wrote for the Earth Day LA HONUA 2022 in Kahuku. It was read by Lynell DaMate of the Koʻolau Waialua Alliance. 💓

Aloha Kahuku! Happy Earth Day! My name is Lynda Williams and I am a lifelong 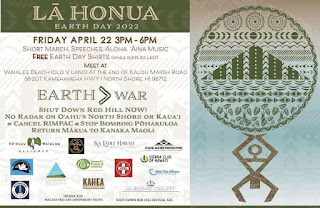 activist for peace, social justice and the demilitarization of Planet Earth. I am sorry I cannot be with you today in person but I am with you in spirit and in the fight to protect Hawaii from US militant imperialism. By profession I am a physics professor but my passion is to empower people with scientific knowledge to save Planet Earth from the ravages of capitalism, imperialism and militarism. I have been working as a science advisor with the GLOBAL NETWORK for over 25 years and one of my areas of expertise is Nuclear Weapons, Missile Defense and Space Weapon systems. From my years of experience, I can assure you that it is a scientific fact the Missile Defense systems will not and cannot protect Hawaii or anyone, anywhere, from nuclear attack. That is why I VEHEMENTLY OPPOSE THE HOMELAND DEFENSE RADAR in Hawaii, Guam, Japan, Alaska – or anywhere on Earth or in Heaven – because the technology of WAR cannot protect us from WAR. The reasons are simple:

First of all, the HDRH works with a ground-based interceptor system – that means that if an intercontinental ballistic missile or ICBM is launched from an ‘enemy” towards Hawaii, the HDRH would detect it and then interceptor missiles would be launched from California and Alaska to intercept and destroy the missiles before they hit their target. Sounds reasonable but it is insanely DIFFICULT – like hitting a bullet with a bullet moving at supersonic speeds! THE SYSTEM HAS NEVER BEEN PROVEN TO WORK OR ACTUALLY TESTED IN REAL WORD SCENARIOS! This is why scientific organizations such as the Union of Concerned Scientists oppose wasting hundreds of billions of dollars on missile defense systems – they will never work. It only provides a false hope of safety that prevents humans from resolving conflicts through peaceful means and bleeds money away from desperately needed social programs and restoring the Aina.

Secondly, WE ONLY HAVE 44 INTERCEPTORS.  That’s it folks!  Russia alone has about 1000 ICBMS! China has about 100! And we have only 44 shots at intercepting them? This is what we have wasted a hundred billion dollars on? This is obscene waste and stupidity.

But what REALLY blows my mind is that the very GOAL of Missile Defense is to intercept and BLOW UP the nuclear missiles in SPACE while on their way to the target. Even if they were successful, which is highly unlikely, such an intercept would create so much radioactive space debris it would have a catastrophic snowball effect to ALL the satellites in space! HOW STUPID IS THAT? And that is the BEST PLAN they came up with?

If the interceptors don’t work, then they will launch interceptors from ships while the bombs are on the way down to the target – and if that were successful, which is highly unlikely, that would also have catastrophic effects to the region. How is that going to protect Hawaii? Furthermore, if HDRH is built in Hawaii then you can be sure interceptor systems like Aegis Ashore will be deployed in Kauai and Hawaii will then become an even greater target than it already is, if that is even possible!!

There is no scenario in which HDRH or Missile Defense makes Hawaii or the world a safer place! HDRH will intensify an already out of control global arms race! Next its hypersonic missiles and space-based interceptors! And now the US is going to spend another hundred billion on NEXT GENERATION INTERCEPTORS that will also never work to protect us! This cycle of technological weapon war profiteering that is bleeding us and Mother Earth dry will never end unless we stop it!

HDRH will never work to protect or defend Hawaii because the Missile Defense system it is a part of is fundamentally flawed and will never work – except for the one goal it is really intended to serve – and that is to perpetuate endless weapon and war profiteering of the military industrial complex and the continued oppression of the people by the imperial capitalist patriarchy raping and pillaging Mother Earth!!!

The ONLY way to protect Hawaii and Mother Earth from nuclear weapons is to ABOLISH nuclear weapons!  There is no other alternative. Nuclear weapons must go extinct or else humanity will. As Martin Luther King so wisely said long ago, “Our scientific power has outrun our spiritual power. We have guided missiles and misguided men.” Instead of putting our precious resources and brainpower into new technologies of killing machines destroying Mother Earth, humanity must EVOLVE socially and culturally, and develop tools of restorative environmental justice to SAVE Mother Earth. That cultural knowledge exists and is called Aloha Aina.

Aloha Aina can save the world!

Posted by Lynda Lovon at 6:06 PM No comments: