Yet again, the nuclear power spin doctors are claiming that the only health risk from ionizing radiation is the stress caused by an irrational fear of the risk. Two scientific reports came out this week that predict no health risks or effects from the ionizing radiation released by the Fukushima nuclear accident and the corporate nuclear gangsters driving the media blitz bandwagon have been having a field day with it.

During a recent UN meeting on atomic radiation, UNSCEAR released a preliminary assessment of their research on the heath and cancer risk in Japan due to the Fukushima accident, and surprise, what they have found is that there is no risk. According to their press release

"Radiation exposure following the nuclear accident at Fukushima-Daiichi did not cause any immediate health effects. It is unlikely to be able to attribute any health effects in the future among the general public and the vast majority of workers," concluded the 60 th session of the Vienna-based United Nations Scientific Committee on the Effect of Atomic Radiation (UNSCEAR).

It didn't take long for World Nuclear News, the megaphone of the nuclear biz to blitz the good news.

"The most extensive international report to date has concluded that the only observable health effects from the Fukushima accident stem from the stresses of evacuation and unwarranted fear of radiation."

Huffington post carried a Reuters story No Rise In Cancer Seen From Japan's Fukushima Nuclear Disaster, UN Says in which they quote a senior member of the committee, Dr.Wolfgang Weiss:

"Weiss, who chairs work on UNSCEAR's Fukushima report, told reporters that dose levels were "so low that we don't expect to see any increase in cancer in the future in the population"."

But who is this Weiss Guy? Who is UNSCEAR and why should I believe what they report?  UNSCEAR is subservient to the UN's International Atomic Energy Agency (IAEA), the global pimp of nuclear power.  UNSCEAR, which I like to pronounce "unscare" as it seems that their main purpose is to dispel any concerns about nuclear radiation, are not an autonomous independent agency. Not only is UNSCEAR loaded with scientists in the nuclear industry, every report must be approved by the IAEA. UNSCEAR was strongly criticized by the international scientific community a few years ago with its assessment of the consequences of the Chernobyl accident in which they claimed only 31 people died as a result of radiation. For more information on that coverup, read my blog about it here.

Who is this Weiss guy? Wolfgang Weiss is a boss on Euratom which, according to Wikipedia is an international organisation founded in 1958 with the purpose of creating a specialist market for nuclear power in Europe, developing nuclear energy and distributing it to its member states while selling the surplus to non-member states.  Weiss is in the business of promoting nuclear power!  Do you trust his opinion on the health effects or consequences of ionizing radiation and nuclear accidents?

Today, the US National Academy of Sciences (PNAS) published a study Evaluation of radiation doses and associated risk from the Fukushima nuclear accident to marine biota and human consumers of seafood that claims that, although  radioactive Pacific Bluefin Tuna (PBFT) from Fukushima have been detected on the west coast, there is little health risk to eating them: 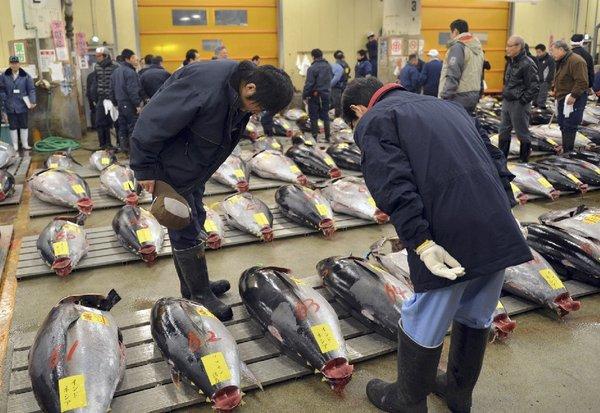 "Although uncertainties remain regarding the assessment of cancer risk at low doses of ionizing radiation to humans, the dose received from PBFT consumption by subsistence fishermen can be estimated to result in two additional fatal cancer cases per 10,000,000 similarly exposed people."

In today's LA Times article Scientists to eaters: Don't freak out over Fukushima fish, they quote Nicholas Fisher, one of the authors of the study:

"Fears regarding environmental radioactivity, often a legacy of Cold War activities and distrust of governmental and scientific authorities, have resulted in perception of risks by the public that are not commensurate with actual risks,"

This is the usual tact of the nuclear spin masters: claim that any and all concern over ionizing radiation is due to an irrational fear of everything atomic.  We are too scared and stupid to do the science. And the mainstream media is more than eager to perpetuate that fallacy. But who is this Fisher man? From his website at Stonybrook he clearly is an expert of contamination in marine organisms. However, nowhere do I see any work or background in psychology that would qualify a statement quoted above. And he goes on:

"This study shows that the committed effective dose received by humans based on a year's average consumption of contaminated Pacific bluefin tuna from the Fukushima accident is comparable to, or less than, the dose we routinely obtain from naturally occuring radionuclides in many food items, medical treatments, air travel and other background sources," Fisher and his co-authors wrote.

So what he seems to be saying is that if you eat the fish for a year you will DOUBLE the your exposure due to background radiation. Is that supposed to be a good thing? It is very deceptive.

The TRUTH is that is impossible to predict risk due to low level radiation. The TRUTH is that more radiation necessarily implies more risk. How much more? You can never say for certain because the dose is calculated by adding the the total energy per decay over some period of time and then divide that by the mass of the body or organ. Then you multiply that number by a 'dose coefficient' that amplifies or reduces the risk - depending on who did the calculation. It is complicated and worth another blog post for me to try to explain it. But it is really bad science.

In reality, radiation doesn't work like that. Calculating dose does not calculate real risk. It is some crazy mathematical average. It is like saying that if a shooter goes into a theater and opens fire, nobody will statistically get hurt because the energy of the bullets will be added up and then shared among all of the people. An alpha particle slicing through a DNA molecule or cell membrane doesn't distribute its energy like a flame to a pot of water. It is madness. And stupid science. The dose calculation is a ruse for the scientific-nuclear empire to appear in control of the consequences of its toxic technology so they can continue to propagate more of it. And the corporate media is all too eager to help them spread their lies and deceptions.

Is it coincidence or orchestration that the announcement that the EPA is weakening radiation protection comes at the same time as the 'reports' and 'studies' that there is no heath risk or consequence from the Fukushima nuclear disaster? It isn't conspiracy theory, it is media theory and business as usual.
Posted by Lynda Lovon at 4:46 PM 6 comments: